Posted by : Sandeep September 3, 2012
Nellore is a city in Indian state of Andhra Pradesh. It is the headquarter of Potti Sri Ramulu Nellore district. The district earlier was known as Nellore. The city of Nellore was known in ancient times as Vikrama Simhapuri. It is situated on the banks of Penna River. It is also famous for its mica and lemon production.    The city gets its name from the Tamil word ‘’Nell’’ which means Paddy. The cultivations of paddy are done here on large scale.  Nellore is also one of the fastest emerging economy in the state of Andhra Pradesh.  The region was under many dynasties like Kharavela of Chedi, Mouraya dynasty, Pallavas, Satvahan, Cholas dynasty etc. 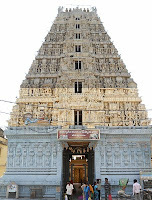 It is located just 5 km away from Nellore. The temple is built 6000 years ago and is located on the banks of Penner River. The temple has seven beautiful gold Kalisams. Brmhostavam, a grand festival is celebrated here every year during the month of March-April.

It is another place of worship in Jonnwada near Nellore. The temple is situated just 12 km from Nellore. The deity of the temple is believed to fulfill the wishes of devotees and hence it is visited by many people throughout the year.

It is another religious place you can visit. It is believed to be built in 9th century and inscription found on the rock proves that the temple was founded by Narasimha Varma, a Pallava King.

It is yet another sacred ancient place. According to mythology it is said that lord Narasimha bathed here in Penchalakona after he killed a demon named Hiranya Kashyap and took his original form of Lord Vishnu.


The temple of Sri Gayathri Devi Vishwakarma :
It is another religious place to be seen near Nellore. It is situated in Virat Nagar and believed to be one of the largest Gayatri Devi temples in entire state of Andhra Pradesh.
Nellore is well connected by road and rail to other parts of state and the country. Nellore railway station is well linked by many trains to Hyderabad, Chennai and other cities and towns of the state and the country. Many state run buses and other private vehicles are available form other cities and towns of the state. Chennai serves as the nearest airbase to Nellore. Chennai is about 174 km away and is well linked by many flights to other major cities of the country.