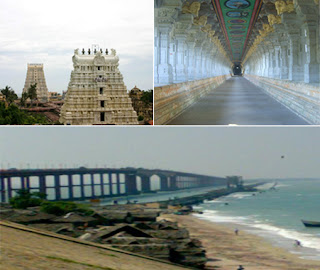 Rameshwaram is a Hindu holy pilgrim city in Ramanathapuram district of Tamil Nadu state in India. It is placed on the Pamban Island which is not directly connected to the Indian mainland, Pamban channel separates the two land masses. There is a long Pamban bridge connecting both the lands. Rameshwaram is about 50 Kms from Mannar Island, Sri Lanka. Rameshwaram is one among the twelve Jotirlingas in India and is one amongst the Char Dhams of Hindu pilgrimage. The other three being Dwarka, Badrinath and Jagganath Puri. There for Rameshwaram is a very important pilgrim center for Hindu Devotees. According to religious scriptures Lord Rama built a bridge Ram Setu on the Sea from Rameshwaram to Lanka to facilitate his army to cross the ocean to fight with Ravan and bring back his abducted wife Sita. The bridge was built from Dhanushkodi the southern tip of the Island. Ex president of India Dr. A.P.J.Kalam belongs to this fishing settlement of Dhanushkodi. Rameshwaram is a conch shaped Island only 61 Sq. Kms in Area.  The Ramnathswamy temple occupies the major area of Rameshwaram. The beach at Rameshwaram has no waves at all in it. It is said that it was Lord Rama’s pray to the Sea God to give a path to Lanka, the God of the sea to allow  smooth passage to Lanka, made his waves calm here, thus the bridge building was made easy. The weather in Rameshwaram is Dry Tropical type, temperature in the town being between 17° to 37° throughout the year.
According to the religious scriptures (Puranas) Lord Rama was advised by the rishis to install and worship Shivalinga to absolve him of the sin of Killing a Brahman (Ravana). Hanumanji were sent to mount Kailash to bring a Shivalinga. As Hanumanji were getting  late on return, Sita mata meanwhile made a linga of sand for worship. To Please Hanumanji,  linga brought by him was also installed beside the sand linga and lord Rama asked to ever worship Hanumanji’s linga first and the sand linga later. The Ramanatha Swamy temple has the biggest temple corridor (about 1220 meters total length) amongst other Indian Temples. There are 22 wells in the temple premises the water of each well is different from other.

How to reach :
Rameshwaram can be reached by road from all the towns of the state and outside. There are direct trains from Madurai, Chennai and Kanyakumari from the terminal town of Rameshwaram. One direct weekly train runs from Rameshwaran Dham to Dwarka Dham on a 72 hours journey thereby connecting two of the Char Dhams of Hindu importance.