Posted by : Sandeep May 7, 2012
Famous for its beautiful sculptured temples, Khajuraho is a major tourist destination in the state of Madhya Pradesh. Beautiful architecture of the temples and exquisitely carved sculptures that adorn the temples make Khajuraho a UNESCO World Heritage Site. 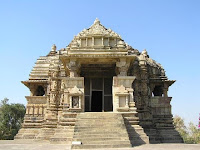 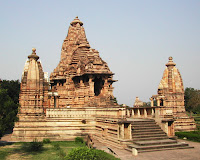 The temple is dedicated to Lord Vaman, the dwarf lord. The temple is situated in the north of Khajuraho district of Madhya Pradesh and is an ancient temple. The structure of the temple bears similarities with the largest temple of Khajuraho. Adinath temple, Parswanath temple, Laxmana temple and Javari temple are some of the many other prominent temples of historic and architectural significance in Khajuraho.

By Air:
Has it's Domestic Airport (hjr) which is well-connected to most of the Indian cities such as New Delhi, Mumbai, Varanasi, Allahabad and Bhopal.

By Road:
Khajuraho is well connected to all cities in the state and you can take drive in your own vehicle or hire a cab or taxi to reach at this destination.