Fair and Festival in Solapur 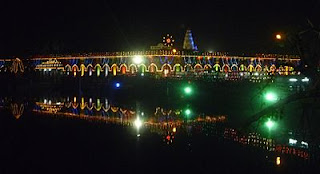 Solapur is a municipal corporation city located in south eastern Maharashtra on the banks of river Sina.

Solapur is a melting pot with a confluence of Marathi, Telugu and Kannada languages.The city is located on major road and rail routes between Mumbai and Hyderabad.

Gadda Jatra, or Nandi Dhwaja (decorated bamboo pole) Procession is the main event of Solapur. This is a fair of the local tradition associated with a story of the spiritual leader Siddharameshwara. Siddarama who was influenced by the teachings of Basaveshwara of Kalyana (he was the person who propagated Veerashaiva Dharma) had lived here. The villagers consider him as a deity. A young girl of the village had wished to marry him. But, Siddeshwara asked her to marry one of his disciples. Siddeshwara conducted their marriage and the day is celebrated as the Gadda fair now.

The fair is celebrated for three days in the month of January around the Makara Sankranti festival.  A day before and after the Makara Sankranti festival are the festival days in Solapur. It is a Marriage ritual. Two Nandi Dhwajas will be taken out for procession symbolizing bride and groom and on the Sankranti day the marriage ritual would take place. A fifteen day cultural fair would be arranged on this occasion.

Other than the above said event, Solapur also celebrates festivities related to Tulaja Bhavani and the Vithoba of Pandharapur. Navaratri is the most favored festival here.