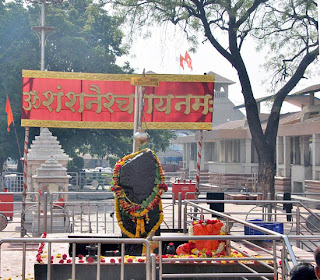 Shani Shingnapur is a popular village located in Ahmednagar district of Maharashtra state. The village lies in Nevasa tahsil and is famous for its Shani Temple. The presiding deity of the temple is Lord Shanidev, the embodiment of a planet Shani (Saturn).  Shani Shingnapur is famous across the world for an interesting fact that no house in the village has doors. Despite that there is no case of theft in the village. People here believe that Lord Shanidev punishes those people who make an attempt of theft in the village. And therefore no report of theft could be found in the village so far.  In 2011 United Commercial Bank opened its ‘lockless branch’ in Shani Shingnapur. The bank branch is one of its kinds in India. It is different thing that bank administration has now started to take some safety measures after the local police claimed that the bank is breaching the code of safety measures prescribed by the Central Government of India for all banks in the country.
Five and half feet high black rock symbolizing the god of Shani (Saturn) serves to be the main deity of the temple here. A Trisul (trident) is placed near the deity. An image of Nandi (bull) is also placed there. Small images of lord Shiva and Hanuman could be located there. Shani Shingnapur has become a major pilgrimage centre for Hindus. Every day the village witnesses thousands of devotees thronging the place to seek the blessing of Lord Shanidev. The number of devotees runs into the hundreds of thousand on the day of Amavasya (new moon day). The day of Amavasya is believed to be an auspicious one to appease Lord Shanidev.  The day of Shani Amavasya (the new moon day falling on Saturday) assumes utmost importance here. On the occasion of Shani Amavasya Shani Shingnapur hosts a large fair and witnesses a sea of people coming from different parts of the country.  Samadhi (tomb) of Sant Shri Udasi Baba and Shri Dattatray temple are other religious places situated in Shani Shingnapur.