Posted by : Sandeep March 21, 2013
Pelling is a town in the state of Sikkim, India. It comes under Geyzing district of the state. The town is situated at the altitude of about 2000 m and offers magnificent views of snow covered mountains of Kanchenjunga ranges. Most of the people of the region depend upon the farming and its related activities. Maize, millet, wheat and Paddy are major crops of cultivation in the region. While Planning of development of tourism in the region environmental issue is also taken in to consideration. It’s planning and implementation is mainly done with help of local people.
There are many places of attraction in and around Pelling.

PemayangsteMonastery :
Pemayangste Monastery is another place attraction you can visit in Pelling. This Buddhist monastery was built in 1705 and is one of the oldest monasteries in the state of Sikkim. It is a three storied structure and houses the beautiful sculptures and wall Paintings.

Kecheopari Lake :
Kecheopari Lake is another place of interest near Pelling. The lake is considered to be one of the most sacred places in the state. the lake is surrounded by dense forest. Tourists are seen offering pieces of biscuits to the fishes in the lake. Take out some time out to visit this beautiful place and do not forget to take the packets of biscuits to the lake. 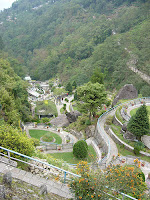 Sewaro Rock Garden :
Sewaro Rock Garden is famous picnic spot in Pelling. it was developed by state tourism department. It is covered  with dense forest and has recreational facilities like fountains, swimming pools, resting sheds, ponds etc.
Rimbi waterfalls, Karchen power house, Rabdanse Ruins Changey waterfalls are some of many other place of interest to be seen in and around Pelling.
Most of the people of the region are of Limbo tribe. Traditional dance and songs of the tribe are performed during festivals and other important events.

How to reach:
Jalpaiguri is the closest railway station to Pelling. The railway station is well linked to other many cities and towns of the state and the India. from Jalpaiguri there are many state run buses and other private vehicles available to get to Pelling. these modes of transport also connect the town to other cities and towns of the state. Bagdogra serves as the nearest airbase to Pelling.   The airport is about 124 km away from it and is well connected by several flights to other major cities of the country.