Kanchipuram is a city in Indian state of Tamil Nadu.  It was formerly called as Conjeevaram. It is situated on the bank of Palar River and is famous for its temples and hand woven silk saris.  It is also known as Silk City. Weaving silk saris is the main profession of the people of Kanchipuram. There are about 5000 families engaged in this profession. It is also known as the city of temples. Kanchipuram house as many as 1000 temples and some of them are historical important.

Places to visit:
Kanchipuram is home to many temples of historical and religious significance. 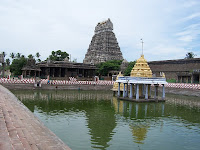 Devarajaswami Temple :
Devarajaswami temple is dedicated to Hindu god lord Vishnu. The temple was built by Vijayanagar kings. It has many beautiful pillars carved throughout the temple. The temple also has a majestic marriage hall which is built in remembrance of the marriage between Lord Krishna and goddess Laxmi. 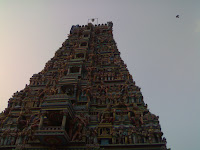 Kachabeswarar Temple:
Kachabeswarar temple in Kanchipuram has beautiful sculptures and engravings.   Here you can see Lord Vishnu in the form of tortoise worshipping Lord Shiva.

Kamakshi Amman Temple :
Kamakshi Amman Temple is located in the center of the city. It was built in 7th century and renovated in 14th century. The temple is dedicated to goddess Paravati. It is famous for being one of the three holy places of Shakti Worship.
Kanchi Kamakshi Temple is another famous temple in Kanchipuram. The temple has beautiful sculptures and some colorful paintings worth watching.
Vainkunda Perumal temple and Vardaraja Temple are some of the many other temples to be seen here.