Guhagar is a town of Ratnagiri district of Indian state of Maharashtra. The district is situated in Konkan region of the state. It is mainly known for its beautiful and clean beach. The town and the surrounding region are famous for coconuts, Happus Mangos and betel nuts.  Konkani is the native language of the region. Marathi and Hindi are other languages spoken here. Guhagar has become a popular tourist spot to spend holidays. Beautiful natural surroundings unexploited beach of Arabian Sea and many religious temples draw many tourists from far and wide.
Guhagar houses many places of attraction including its beach, beautiful natural sights, and religious important temples in and around it.

Gopalgad hill :
Gopalgad hill is another place of interest. It is situated in Anjanvel village near Guhagar. There situates a historical important fort known as the Gopalgad Fort. This fort is believed to be founded by Siddis in the early 16th century. Later it was conquered by Shivaji Maharaj. Gopalgad hill also offers a trekking site to tourist. A premise of lighthouse which is located on the top of the hill provides tourists fascinating views of beautiful surrounding nature. 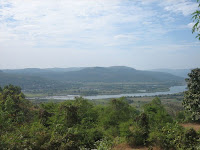 Hedvi :
Hedvi is another popular religious place. It is a small village situated about 27 km from Guhagar. The village houses two important places of religious significance.

Temple of Vyadeshwar, Ufarata Ganpati, Velaneshwar, Budhal, Chandika Mandir are some of the other religious sites to be seen here in and around Guhagar.
How to reach there:
You can reach this beautiful town by State Transport buses from Mumbai, Thane, Pune, Chiplun and other cities and town of the state. Other private vehicles like cars and luxury buses are also available from these cities and from other parts of the state. Chiplun is the nearest railway station to the town. It is about 40 km away from it and connected by many trains to other cities of the state and the country. Chhatrapati Shivaji International Airport at Mumbai is the closest airport to Guhagar. It is about 300km away from the town. The airport is well linked by many domestic and international flights to other major cities of India and other countries.

Other details: Guhagar offers tourists its home made products like Phanas Poli, Amaba Poli, Pickles, Kokan  Agal, Jams, etc. Prepared by family members, food is of good taste and Hygienic to eat. The dishes include some local foods also.