Posted by : Sandeep September 15, 2012
Kamshet is popular hill station situated in the district of Pune of Indian state of Maharashtra.  It is just 11km from twin-hill station of Lonavala and Khandala. Kamshet is famous picnic spot to spend holidays. It is located at the altitude of 2200 feet. Its temperature ranges from 25 to 40c in summer and from 10 to 26c in winter.  It is gifted with lush greeneries and many beautiful lakes around.  Marathi is widely spoken language of the region. Though Kamshet is visited by the tourists throughout the year, October to March is the best time to visit it.

Places to visit:  Kamshet houses many places of interest in and around it.

Bedsa Caves :-
It is another tourist attraction. These Buddhist caves are believed to be built in 1st century.  Other than statues of Buddha and Stupas, The Caves houses sculptures of dancing animals.

Bhaja Caves:-
Bhaja Caves is yet another Buddhist Caves to be seen here. In theses caves there are about 18 rock cut caves and are believed to be built in 200 BC. The caves have 14 Stupas with 5 ones being inside while the other 9 ones are outside the caves. It is around 59 k.m. away from Pune.

Shri Kondeshwar Temple:-
It also known as elephant temple, is situated at Phohara near Kamshet. Surrounded by lush green forest, the temple is dedicated to the Hindu god Lord Shiva. Many devotees and tourist visit the spot throughout the year. 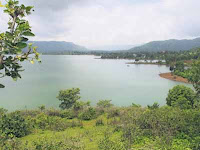 Vadivali Lake :-
It is anther tourist attraction in Kamshet. The lake and its beautiful surroundings offer tourists many picturesque views.

Other details:-
Kamshet is Known as para-gliders paradise as it offers its tourist and visitors world-class facilities of Paragliding. Tower Hill is the place from where para-gliders take off from the heights of 175feet. And if one wants more thrilling experience of paragliding and is hardcore para-glider, Kondeshwar Cliff is the right place for him. It offers them the height of 2200 feet for paragliding.