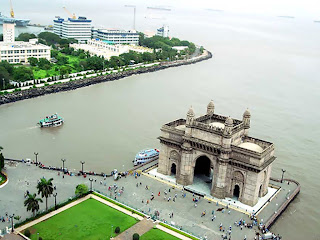 This graceful ceremonial archway on the waterfront in the Apollo Bunder area in South Mumbai, Maharashtra state in India. It was built to commemorate the arrival of King George V and Queen Mary for the Delhi Durbar of 1911.The gateway was built from yellow basalt and concrete. The central dome is 48 feet in diameter and 83 feet above ground at its highest point.

The foundation stone was laid on 31 March 1911, by the Governor of Bombay Sir George Sydenham Clarke, with the final design of George Wittet sanctioned on 31 March 1913.Between 1915 and 1919 work proceeded on reclamations at Apollo Pier for the land on which the gateway and the new sea wall would be built. The foundations were completed in 1920.It has historical significance for India because after the country gained Independence, the last British troops left Indian soil, marching under this imperial archway to board their waiting ships.
From 2012, Maharashtra Tourism Development Corporation decided to shift Elephanta Festival's Venue to Gateway, replacing Elephanta Caves for convenient issues.