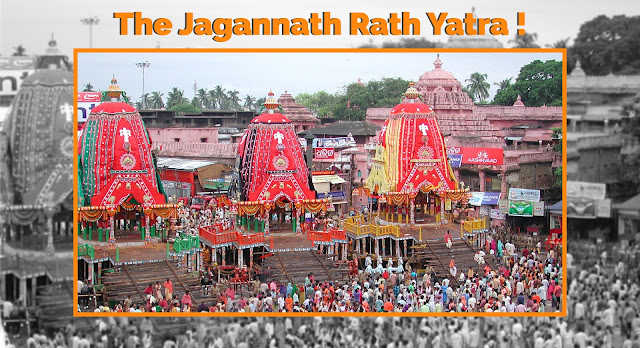 
Rath Yatra is big event and festival celebrated at Puri in the state of Orissa, India. The festival is related with the Lord Jagannath. It celebrates the occasion of the journey of three siblings namely Lord Jagannath, lord Balaram and Subhdra to their aunt’s temple, Gudicha temple for nine days after then the return journey of the deities to the main temple is known as the 'Bahuda Yatra'.

To commemorate the incidence people organize the Rath Yatra event in which three large beautifully decorated chariots resembling three temples are drawn by the huge number of devotees. The chariot / Ratha of Lord Jagannath known as 'Nandighosha', chariot of Goddess Subhadra named Darpadalana and the Ratha of Lord Balabhadra named Taladhwaja Rath Yatra is organized in the months of June- July at the temple of lord Jagannath in Puri.

The festival of Rath Yatra draws thousands of devotees from all parts of the India and even from abroad to witness the majestic event of Raths (chariots) being drawn by thousands of devotees.  Devotees come here with their holy wish of pulling the chariots as the act is supposed to be pious one. The procession starts from the Jagannath temple with drums, trumpets, tambourines etc. These 40 to 50 feet high chariots pulled by thousands of devotes is a really magnificent view witnessed by the millions of people gathered there on the occasion.

Three chariots pulled in the procession are built a new every year. These chariots are made of woods of particular trees like Dhausa, Phassi etc. The event of Rath Yatra is so huge that some Indian and foreign T V channels are lured to telecast the event. However witnessing the holy Rath Yatra in person gives you the divine satisfaction which is difficult to find elsewhere.

One of the most awaited and much-celebrated festivals in Orissa will be start on 4th July, 2019.

Puri does not have an airport. Bhubaneshwar's Biju Patnaik airport is the nearest airport to Puri which is at a distance of 63.9 kms.
You pre book a taxi or cab from airport to Puri.

Puri has a terminus train station which is consider as one of the busy railway station in the India. It has fast and super-fast train connections with many major towns in the country such as New Delhi, Mumbai, Kolkata, Okha, Ahmedabad, Jodhpur, Tirupati.

It has good road connectivity with Bhuwaneshwar and other towns.You can choose state government's tourist buses or hire a convenient taxis or cabs to reach here.

If you to witness this magnificent festival then plan now. And if you need help deciding and customize your ideal trip, just make a inquiry here Quick Inquiry for package.