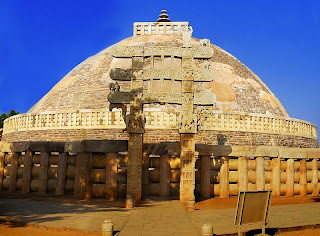 The great Sanchi Stupa is the oldest stone structure of India. It is a part of the large complex of Buddhist structures mostly Stupas located at a small village called Sanchi. Sanchi lies just about 50 km north east of Bhopal city, the capital place of Madhya Pradesh state. This world famous religious and equally historic place has been recognized as a World Heritage Site by UNESCO. Built by the emperor Ashoka in the 3rd century BC, Sanchi Stupa still stands there intact presenting us the great Buddhist architectural style of ancient India. Along with this great Stupa no 1, Sanchi hosts many other Buddhist Stupas and structures with much historic and religious significance.

Home to the great Stupa and other Buddhist structures, Sanchi in Madhya Pradesh is major tourist and pilgrimage spot in India. Sanchi witnesses thousands of tourists and devotees visiting the place throughout the year.  The Sanchi Stupa was built over the relics of Lord Buddha. The place also housed a pillar edict of Ashoka. The top part of the pillar, which featured four lions, has been placed in a museum of Department of Archeology.  Sanchi Stupa was just hemispherical brick structures containing the relics of Lord Buddha. Addition of the new Stupas, carvings, architectural works continued for next few hundred years under several dynasties.

The state of Madhya Pradesh takes pride in having the place like Sanchi which owing to its several Buddhist Stupas (mainly the great Stupa no1) has earned itself the status of a world heritage site from UNESCO. The great Stupa is the key attraction of Sanchi.  Paved way around the great Stupa has turned into a smooth one due to the visit of number devotees over the years. The Stupa is also known for its four exquisitely carved gateways. These four gateways are located in four directions around the Stupa. The gateways are mainly known for their rich carvings which depict several incidences from the life of Lord Buddha.