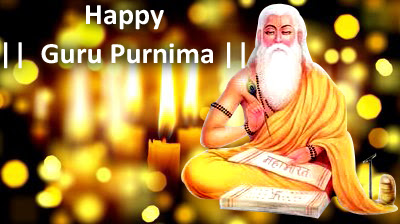 'Guru Purnima' is a festival celebrated to pay respect to spiritual leader called as Guru. The festival is mainly celebrated by the Hindus and Buddhists in India. The word 'Purnima' means the full moon day and Guru Purnima also falls on the fool moon day in Ashadh (June-July) month of Hindu calendar. Hindus celebrates the Guru Purnima in honor of a great sage Vyasa who is regarded as one of the greatest religious leader (guru) by Hindu. Guru Purnima not only marks the birth day of the sage but this is the same day when he began writing the Brahma Sutra (a religious script).   It is also the day when Lord Buddha made his first sermon at Sarnath in UP and hence in Buddhism the day is observed in honor of Lord Buddha who is regarded the Guide and religious leader of the people.

The Significance of Guru Purnima

Origin of Guru Purnima festival dates back to Indian ancient Guru-Shishya (disciple) tradition which symbolizes the holy relation of Guru-Shishya. It is an auspicious day when people are seen expressing their gratitude towards the person they regard as Guru. The celebration is throughout the country and Hindu monks called as Sanyasi celebrated the day by offering prayer to the Guru. Programs of reciting Hindu scripture, especially Guru Gita written by Vyasa himself, are held in all parts of the country. Bhajan and Kirtan are also organized on the day to mark the Guru Purnima. The festival also includes the ritual of Padapuja, worshipping Guru's feet. Many devotees are seen worshipping the sandals which are regarded as the symbolic feet of the Guru. They are also seen taking pledge to follow in their life the teaching and guidance of their gurus.