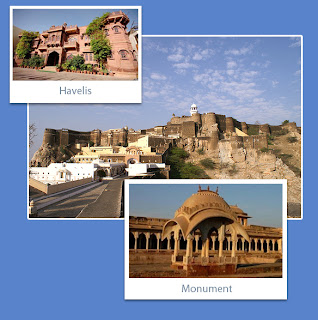 Kuchaman, well known for its Shekhavati style Havelis, is city in Nagaur district of the state of Rajasthan, India. Many historical monuments make it one of the most popular tourist destinations in Rajasthan. It is mainly popular for its Kuchaman Fort which is the prime attraction of the tourists. Temperature of it reaches up to 48 c in summer while winter is cool and best time to visit.

Places of interest: Kuchaman houses many places worth visiting. Most prominent place of attraction of Kuchaman is it’s fort known as Kuchaman Fort.

Kuchaman Fort :
The fort is situated at the top of 1000 feet high cliff. The fort is now heritage hotel but still it allows visitors to watch many beautiful palaces and Mahals in the fort. It also displays the collection of interior designs made of semi precious stones, glass and gold paint.

Meera Mahal :
Meera Mahal is another monument which attracts many tourists. The Mahal has miniature paintings about the life of Saint Meera. Saint Meera was passionate devotee of Lord Krishna.

Jal Mahal :
Jal Mahal was built to provide queens and princes a hidden swimming pool. It is pool built underground and it looks royal in every aspects. Sabha Prakash and Sunehari Mahal are some of the other attractions of Kuchaman Fort.

Krishna Mandir :
Krishna Mandir is old temple built about 200 year ago. It houses the idol of Lord Krishna made of eight mettles.

Maa Kaali Mandir :
Maa Kaali Mandir is another place of interest in Kuchaman. It was brought from Karnataka as war trophy as it was the way of those days. The temple is about 1200 year old.

Ganesh Dungri :
Ganesh Dungri is Ganesh temple built during the rule of raja Hari Singh. It is situated in elevated Dungri hills near Kuchaman.

How to reach:
You can get down at Bikaner railway station as it is closest one to Kuchaman. It is about 115km away and well liked to other cities and towns of the state. There are many state run buses and other private vehicles like cars and luxury buses available from other cities and town to reach here. Sanganer Airport at Jaipur is closest to Kuchaman and it is well linked by several domestic flights to other major cities of the country.