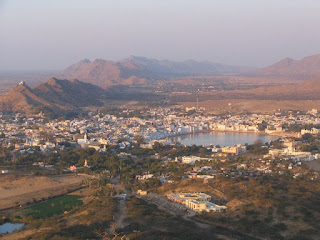 Pushkar is a holy town in Indian state of Rajasthan. The town is in the Ajmer district of the state. Pushkar is popular for its Bramha temple and Pushkar Lake. It is one of the most prominent pilgrimage centers for the Hindus. Pushkar literally means the lotus flower which is said to be the seat of Lord Brahma. According to mythology he is supposed to be the creator of the world.  Pushkar houses a temple of Lord Brahman and it is special one considering the fact that there are very few temples of Lord Brahma in the world

Rangji Temple:
Apart from the temple of lord Brahma Pushkar also house other temples in and around it. Rangji Temple is one of them. Though the temple falls in northern part of India, it is built in typical south Indian style.

Pushkar Lake :
Pushkar Lake is beautiful and sacred place as well.  The lake is very old and is pilgrimage place for Hindus. It is surrounded by many Ghats which are used by devotees to take holy bath in the lake on the occasion of Kartiki Pournima (a particular full moon day).

Pushkar Fair :
Pushkar Fair is the most fascinating event in the Pushkar. The fair is organied in the month of the October- November and continues for five days. The fair is visited by thousands of tourists from all over the world. Pushkar fair also contains the cattle festival. Thousands of camels from far and wide are brought and displayed in the fair. Trading of camels is also done there.
You can also have an amazing experience of camel safaris in Pushkar. It is famous for camel safaris and many tourists are seen enjoying the camel ride.

How to reach :
Ajmer serves as the nearest railhead to Pushkar. It is just 11 km away from Pushkar and well connected to other cities and towns of the state and the country. Many state run buses and other private vehicles are also available Ajmer and Jaipur and many other cities and towns of the state. Jaipur is the nearest airbase to Pushkar. It is about 130 km away from it and well linked by several flights to other major cities of the country.