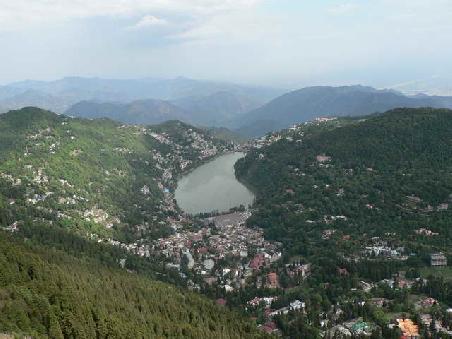 Situated at the altitude of 1938 m, Nainital is a famous hill station in the state of Uttara Khand, India. It is the head town of district of the same name Nainital district. It is also known as the Lake District of India. Nainital is located in a valley which has beautiful pear-shaped lake. The lake is two mile long in circumference. Nestled with fascinating mountains and beautiful natural surroundings, Nainital has become a popular tourist spot in the state. It has pleasant weather throughout the year and can be visited any time of the year.

Nainital is gifted with many places of tourist attraction in and around it. Naini Lake is the main place of interest in the town. The lake is situated in the center of the town and because of this lake Nainital has earned fame as hot tourist spot.

Bhimtal Lake is another lake located just 22km away from Nainital. It is the largest lake of Nainital.

Naini Devi temple is prominent place of worship for the Hindus. It is situated on northern bank of Naini Lake and according to mythology it is believed to be the place where one part of the body (assumingly the eyes) of goddess Sati had fallen when the lord Shiva was carrying her body.

Governor’s House is another place of interest in Nainital. It is built in 1899 and is one of remnant monuments of British era in India. It is built in Victorian Gatholic style of architecture and presently is the guest house of governor of Uttara Khand. Prior permission is necessary to visit this monument.

Snow view point is another must visit place in Nainital. It is perched at the height of 2260 m and offers tourists picturesque views of surrounding snow-covered peaks and other beautiful sights.
Being of the highest peak of Nainital, Naini Peak presents the tourists the most fascinating views of the hill station. The peak is located just 6 km from the center of the town.
Tiffin Top, Land’s End, Pangot and Eco Caves Garden are some of other many places to be seen in and around the hill station of Nainital.

If you are travelling by train, Kathgodam railway station is the place where you can get down. It is just 35km from Nainital and well connected to it by state run buses or you can hire a car, taxi from other cities to reach Nainital. Kathgodam is furthermore well linked by many trains to Lucknow, Agra, Barely and other cities and towns of the state and the country. Pantnagar Airport is located about 71 km from Nainital and serves as the nearest airbase to it. The air port is well linked by several flights to Delhi.