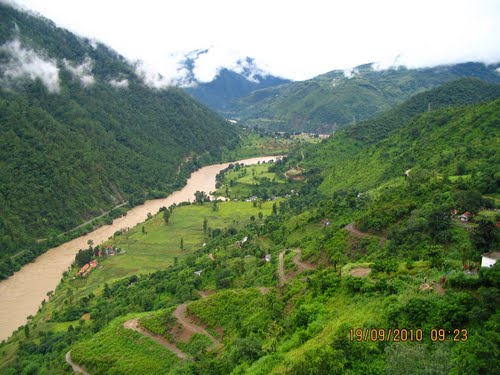 Lohaghat is a hill town in Indian state of Uttarakhand. It is situated in Champavati district of the state. Lohaghat is home to many beautiful places and temples around it. It is elevated at the height of 1706 m and has pleasant climate throughout the year. It can be visited any time of the year.

Places of interest :-
There are many beautiful places and temples in and around Lohaghat.

Mayavati Ashram :
Mayavati Ashram is one among them. It is situated amid the beautiful surroundings. It is also called as Advaita Ashram. The Ashram is visited by large number of spirituals from across the world.
Vanasur Ka Killa :
Vanasur Ka Killa is another place of attraction near Lohaghat. It is situated at the altitude of 1760 m and is 9 km away from Lohaghat. According to mythology it is believed to be the capital of Vanasur who was killed by Lord Krishna.  To reach this place you have to cover 7km by bus or car and rest of 2km by foot.
Abbott Mount :
Abbott Mount is a beautiful place to explore natural surroundings. It is just 8 km away from Lohaghat. It offers tourist calm and scenic environment. Abbott mount has heavy snow fall in winter and remains snow covered during the time. You can also have fascinating views of majestic snow-covered Himalaya from here.
Devidhura is another place of attraction near Lohaghat. It offers many beautiful sights of nature. A Varahi temple is located near this place and is an important temple of the region. It also offers tourists adventurous trekking sites.
How to get there :- Many state run buses and other private vehicles like cars and luxury buses are available from many other cities and towns of the state. Pantnagar airport is nearest airport to it. The airport is about 170km away and is well linked to Delhi which is further connected to other major cities of India and other countries. Tankapur is nearest railway station to it. It is just 90 km away from Lohaghat. The railway station is well connected to other cities and towns of the country.

Other details :- There are some hotels in Lohaghat which provide visitors the accommodation facilities. It is better if you book your rooms in advance as they remains booked most of the time.