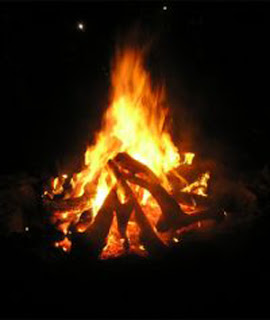 Lohri festival popularly celebrated in North India especially in states like Punjab, Haryana, Delhi, Himachal Pradesh and the nearby areas.
Lohri is celebrated on the 13th of January marking the end of the winter season. The next day is the first day of their month. The festival coincides with the Hindu festival Makara Sankranti (celebrated on the 14th of January). Many people believe the festival began as a celebration of the eve of the winter solstice. The day begins with children collecting money from houses in the neighborhood. Children go from door to door singing songs in praise of Dulha Bhatti, a famous legendary Rajpoot hero of the Punjab who robbed the rich and helped the poor. On the eve of Lohri people create huge bonfires in the harvested fields and in front of homes after that they gather around bonfires and pray for good year. Popular songs, peanuts and corn puffs are enjoyed near the flames. Sarson da saag and makki di roti is usually served as the main course at a Lohri dinner. Farmers pray to God for good harvest seasons and good financial year on the eve of Lohri.