Posted by : Sandeep October 22, 2012
Formerly known as Mercara, Madikeri is a famous hill station in the state of Karnataka, india. It is also the head town of Kodagu district. Madikeri is home to Kodva tribe. The attire of people of Kodva tribe is distinct from other people. These people are seen carrying their traditional weapon like knives. These people are also known for their traditional martial war dances. The town of Madikeri is popular tourist destination and offers its tourists  beautiful natural surroundings to explore the nature.
Places of interest:
Madikeri is a major tourist destination in Karnataka and therefore attracts many tourists throughout the year. There are some interesting places in and around Madikeri. 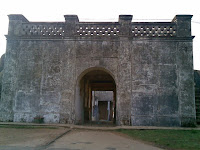 Madikeri fort :
The fort was built by Mudduraja in 17th century and then renovated in 1790 by Tipu Sultan. Tipu sultan also named the place Jaffarabad. The fort was taken into control by Doddavira Rajendra and then by the British. There are two life size statues of elephant at the entrance of the fort. A church is also situated in a part of the fort. Kote ganpati, the famos temple of Lord Ganesha is also situated at the main entrance of the fort. 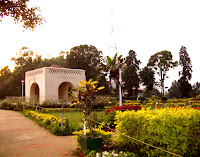 Raja’s Seat :
It literally means the seat of the king. It is believed that the king of Kodgu used to spen his evenings here. It is beautiful garden situated in Madikeri. Here you can enjoy fascinating views of sunset and other majestic views of surrounding hills and valleys.

Omkareshwara temple :
It is temple dedicatd to Lord Shiva. It was built by king Lingarajendra in 1920. The temple is built in Muslim and Gothic architecture styles and is located in the center of the city.

Abbey falls :
Abbey falls is situated near Madikeri and is the main attraction of the tourists. It is amazing to see the water of Kaveari river falling fron the height of 70 feet. The hanging Bridge built on the gorge offers beautiful views of the falls.

Bhagamandala, Chettalli, and Talacauveri are other  place of interest to be seen in and around Madikeri. Madikeri also offers the tourists adventurous activity like trekking. There are number of trekking trails which adventurous tourists can enjoy.

How to get there: Madikeri is situated on the Mysore – Mangalore state highway and it is, thereby, connected to other parts of the state and the country. It is just 120 km from Mysore and 136 km from Mangalore. Many state run buses and other private vehicle are available from Bangalore, Mysore, Mangalore and other   cities and  towns of the state. Madikeri is not linked by rail but Hasan, Kannur are nearest railway stations to it. they each are about 115 km away from the town.