Posted by : Sandeep September 25, 2012
Bhuj is a city in the Indian state of Gujarat. It is the headquarters of Kutch, the largest district of India in terms of area. It is a historic city with long history of kings and empires. It was set up by Rao Hamirji 1510. It was once made the state capital in 1549 by Rao Khengarji I.  In January 2001 Bhuj and other parts of Kutch district were hit by a major earth quake which caused loss of large number of human lives and damage to the property. Bhuj is an important place for shopping of handicrafts.Bhuj offers several places of attraction for the tourists to explore.
Places of interest: There are number of attractions in and around the city of Bhuj. Prominent among them are the historic structures of Pragmahal Palace and Aina Mahal.

Pragmahal Palace :-
Pragmahal Palace was built during the latter half of the 19th century. The foundation stone of the palace was laid by Maharao Pragmalji. This magnificent building structure of Italian marble and sandstone has been built in beautiful Gothic architectural style.  Durbar Hall and Clock Tower are the main highlights of the palace.

Aina Mahal :-
Aina Mahal which literally means the palace of mirrors is one of the most visited places in Bhuj. This small palace built in beautiful Kutchi architecture houses a museum displaying the several painting, embroideries, photos, several artworks, etc. Hall of mirrors is the main attraction of Aina Mahal. It was created by great artisan Ram Singh Malam. The marvelous work of mirrors and glided ornaments on the walls of the hall fascinates one and all. 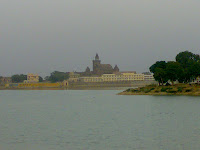 Hamirsar Lake :-Hamirsar Lake is another place of interest to visit in Bhuj. This serene lake is perched in the center of the city and is an ideal place to spend some time in tranquility. Bhujiyo Hill is an old fort built by ancient ruler to protect the city of Bhuj. It is from here one can have panoramic views of the entire city.

Shree Swaminarayan Temple :-Shree Swaminarayan temple is yet another prominent place the tourists hardly miss to visit on their tour to Bhuj.  It is an architectural and religious prominence site. This stunning white marble structure is a great work of architecture. Chhatardi is another place of attraction of Bhuj.


How to reach :
Bhuj Airport has regular flights to and from Mumbai. Taxis are available from the airport to get to the main city. Bhuj has good rail connectivity to other parts of the country. It is well connected by rail to cities like Delhi, Ahmedabad, Mumbai, etc. State-run buses also connect Bhuj to other parts of Gujarat and neighboring state of Maharashtra.