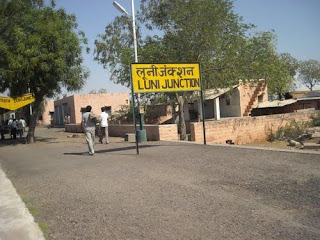 Luni is a tiny hamlet perched on the banks of Luni River just 35 km away from Jodhpur. Luni is served with a railway Junction which comes under Jodhpur division of North Central Railway Zone. Luni is major tourist destination attraction a number of tourists throughout the year. It is mainly famous for its Fort Chanwa, an imposing stone fort presenting us beautiful work of architecture. The entire fort is carved out of red sandstone. The walls of the fort bear the beautiful traditional paintings. The people of Luni are still found pursuing their old traditional profession of carvings of metal, wood and clay. The fort Chanwa in Luni presents us royal past of those days.

Jodhpur serves to be the nearest major railhead to Luni. It is the second largest city of Rajasthan and is major tourist destination in India. It is home to a number of attractions frequented by thousands of tourists from all over the globe.  There are many places of interest which could easily be explored from Luni Jn.
Jodhpur-Pune Exp, Bandra-Bikaner Spl, Dadar-Bikaner Exp, Delhi-Barmer Exp, Jodhpur-Bangalore Exp and many other trains pass through Luni Railway Junction and connect it to many other parts of the country. Jodhpur Airport serves to be nearest airbase to Luni Jn.