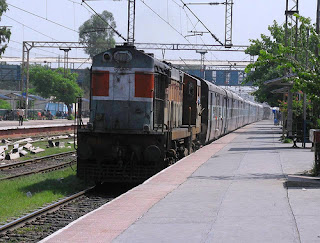 Located on the banks of Gomati River (a tributary of River Ganga), Jaunpur is a town and the headquarters of Jaunpur district in the state of Uttar Pradesh. This historical town is served with Jaunpur City Railway Station and Jaunpur Junction. Jaunpur Railway Junction belongs to Lucknow division of Northern Railway Zone. It is perched on Lucknow -Varanasi rail route. Mughal Sarai Jn is nearby major railhead to Jaunpur Jn.

Jaunpur is famous for several historic and religious places. Lal Darawaza Masjid, Atala Masjid and Jama Masjid are some historic mosques of Jaunpur. Shahi Bridge in Jaunpur is a historic bridge built on Gomati River. It was constructed in the 16th century. Shahi Quila (fort) is another major attraction of Jaunpur. The fort is located near the bridge on the banks of Gomati River. It was built in the 14th century by Firoz Shah Tughlaq.

Jaunpur is just about 65 km northwest of Varanasi, a prominent pilgrimage city of India. Perched on the banks of River Ganga, Varanasi, also known as Banaras and Kashi, holds great significance for Hindus. Sarnath where Lord Buddha gave his sermon is located near Varanasi and is visited by a number tourists and Buddhist devotees.

Shramjeevi Exp (Rajgir-New Delhi), Amritsar Exp (Amritsar-Howrah), Himgiri Exp (Jammu Tawi-Howrah) and Sadbhawana Exp (Muzaffarpur-Delhi) are some of the trains which pass through Jaunpur Railway Junction. National highway no 56 (NH-56) and several other state highways also connect the town to other parts of state and the country. Nearby major airbase to Jaunpur is Varanasi Airport.