Posted by : Sandeep May 17, 2012
Visakhapatnam is a coastal city of the Indian state of Andhra Pradesh. Also known as Vizag, the city of Visakhapatnam serves to be a major tourist destination in the state. Home to several prominent places of interest, Visakhapatnam is visited by a number of tourists throughout the year. 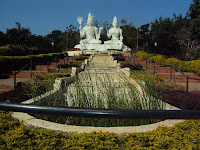 Kailasgiri Park located on the top of a small hill is a major tourist attraction in Visakhapatnam. Situated near the cost of Bay of Bengal, Kailasgiri hill offers panoramic views of the city and its beaches. The hill is known as Kailasgiri due to the presence of sacred statues of Lord Shiva and his wife Parvati. During night entire area is beautifully illuminated offering amazing spectacle when viewed from any part of the city. Rope-way facility has been provided there to reach the top of the hill. One can also enjoy the activity of paragliding which gives a thrilling  experience. 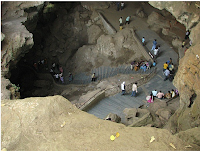 Famous for stalactite and stalagmite formation, Borra Caves situated at Anantgiri in Visakhapatnam is prominent historical site. Discovered in 1807, Borra Caves is an important archeological place in Andhra Pradesh state. Paleolithic implements found there are several thousand years old. The place also assumes religious significance as a Shivlinga and an idol of holy cow Kamdhenu have been placed deep in the caves. This historical and religious significance places is visited by a number of tourist and devotees throughout the year. 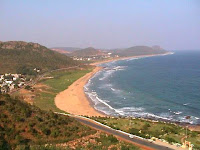 Ramakrishna Beach is much frequented place in Visakhapatnam which lies just about 120 south of Srikakulam city, another major coastal city of Andhra Pradesh. It happens to be one of the most beautiful beaches located of the east coast of India.   Ramakrishna Beach serves to be a perfect place for the people of Visakhapatnam to relax and unwind. The beach derives its name from Ramakrishna Mission and is popularly called as R K Beach. 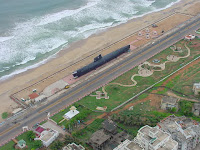 The Submarine Museum is the first submarine tuned to museum in the whole of Asia and second in the World set up at the Rama Krishna beach. Submarine named as INS Kusura is tuned into a museum in 2001.


How to reach Visakhapatnam :

Visakhapatnam airport is the nearest and easiest airport to reach Visakhapatnam. It is located at 7 km away from the city. This airport is well link with other many Indian cities airport. Traveler can hire a taxi online prior to their arrival through recommended car rental services.

Visakhapatanam has also a good connectivity via regular trains with Delhi, Mumbai, Chennai, Kolkata, Thiruvananthapuram, Hyderabad and other major cities of the country.

Visakhapatnam  is well connected to other cities in and around state by state owned passenger buses and private vehicles.