Fair and festival in Visakhapatnam 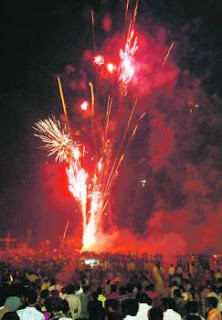 Visakhapatnam, the port city of Andhra Pradesh state, is known for hosting several cultural events and festivals. Also known as Vizag, the city of Visakhapatnam is famous for its Visakha Utsav (festival). Visakha Utsav is a three day long festival organized by Andhra Pradesh Tourism Department. The festival starts every year from third Friday of January and last for the next three days. To promote tourism in and around Visakhapatnam is the main purpose of hosting this cultural event. Folk dance, music, arts, crafts and cuisines are the main highlights of this festival. Rama Krishna beach serves to be the main venue of Visakha Utsav. A number of artists from different parts of Andhra Pradesh take part in the festival and display their arts and skills. Exhibition, fashion show and food fairs are other noteworthy features of Visakha festival
Chandana Yatra, also known as Chandanostavam, is major religious festival celebrated at Sri Varaha Laxminarasimha temple situated at Simachalam near Visakhapatnam. Held every year in the month of March-April, Chandanostavam witnesses a large number of devotees thronging there from all over Andhra Pradesh and some parts of neighboring states. On the occasion of the festival the idol of the main deity which is kept covered with sandal paste all the time is removed ceremoniously and is covered with new and fresh layer of sandalwood.
Rishikonda Beach Festival is another major cultural event of Visakhapatnam organized every year in the month of December. Exhibition stores, craft Bazaar and food shows are the key attractions of the festival. Another interesting festival of Visakhapatnam is Lumbini festival associated with Buddhism. Organized every year in the month of December, Lumbini festival is marked with various religious and cultural activities.