Posted by : Sandeep May 10, 2012
Tiruchirapalli, shortly and popularly known as Trichy, is the fourth largest city of Indian southern state of Tamil Nadu. This historically and culturally rich city was built by Madurai Nayaks. Trichy is located at the geographic center of Tamil Nadu and is home to several places of attraction frequented by a large number of tourists round the year. 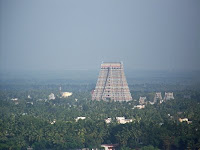 Sri Rangam Ranga Nathar Temple :
Sri Rangam Ranga Nathar Temple is another major place of religious significance in Trichy, located just about 140 km north east of Madurai city which itself is home to many ancient temples and historic structures.  The temple dates back to the 14th century. There had been contributions of several kingdoms in the making of this majestic temple. Devoted to Lord Vishnu, the temple attracts thousands of devotees and tourists round the year.  One can also visit the temple museum housings several historic valuables. The temple also hosts and celebrates an annual festival of Vaikunda Ekadasi in the month of December.
There are many other places of tourist and religious importance which one can explore around city of Trichy. 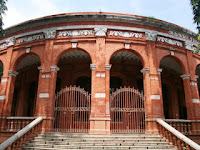 Thanjavur :
Thanjavur is famous as tourist and pilgrimage destination in Tamil Nadu state. It is located just about 55 km away from city of Trichy and is visited by both tourists and devotees throughout the year. One can also take some time out to visit Government Museum located on Bharathidasan Road. The museum has rich collections of bronze and stone sculptures dating back to ancient and medieval age.