Fair and festival in Kanpur 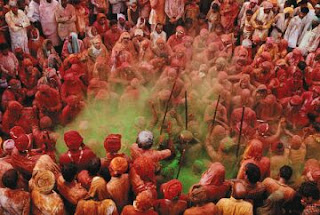 
Holi:
The festival of color- Holi is the most charming festival of India. Like most other parts of the country in Uttar Pradesh  and specially Kanpur also celebrates the festival of Holi with great enthusiasm. Celebration of the festival marks the arrival of spring season. The festival begins with setting off a huge bonfire in the evening.  Celebration of Holi festival for the seven days is a distinct feature of Kanpur city. Young and olds, men and women, rich and poor- all comes together to celebrate this colorful festival.

Shivratri:
It is celebrated to mark the birth anniversary of Lord Shiva. The festival falls on thirteenth day of Phalgun month of Indian calendar. Fast is observed on the occasion of the festival. People throng nearby Shiva temples to offer prayers to the god.

Ramnavami:
Ramnavami is another important festivals celebrated in Kanpur with great religious fervor. It is celebrated to mark the birth anniversary of Lord Ram. Many religious and cultural activities are organized on the occasion of the festival. Recitation of Ramayana is held at several temples located in Kanpur. Kanpur also host many religious fairs which draws a number of visitors from far and wide.