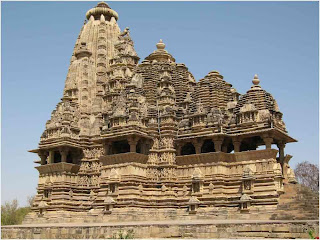 Khajuraho Temple
Khajuraho temple is a World Heritage site in Khajuraho, Mahdya Pradesh.The temples of Khajuraho were built by the rulers of the Chandella dynasty between the 10th and the 12th centuries.The temples serve as fine examples of Indian architectural styles that have gained popularity due to their explicit depiction of sexual life during medieval times and reminders of India's glorious past.
The carvings do not contain only erotic art however few depict the everyday life of the common Indian at that time.Now at the Khajuraho temple professional light and sound show held every evening which is depict the history, Philosophy.