Kolhapur is rich in its cultural heritage. The city is known for its life style, language, outfits and tradition. People of Kolhapur are known for their generous spending of money on their extravaganza life-style. At the same time they are very kind hearted though they are superficially not seen so in their use of language which contains some words which is considered to be rude in other parts of state. But they use it so simple and easily that it does not have any effect on the dignity. Marathi is the widely spoken language of Kolahpur while the use of Hindi and English is also done by few people. 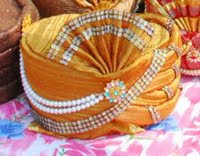 Kolaphuri Pheta (turban) is a part of traditional outfit of men of Kolhapur. Wearing a Pheta is considered as prestigious there. Offering Pheta to the guests is common custom of the people of Kolhapur. Another special thing about the city of Kolhapur is its Kolhapuri Saaz.

It is the special ornament worn by the women of Kolhapur. Beautifully designed jewelry adds the beauty of the women wearing it. Kolhapuri Chappel (a sort of foot wear) is world famous. These are made from the leather and are known for their beautiful design and long life.

Kolhapur is widely known for its wrestling game. It has produced several renowned wrestlers. The Chhatrapati Shahuji Maharaj who himself was a good wrestler is credited for giving the patronage to this traditional sport during his rule. Lavani is special type of classical dance performed with typical songs. Lavani is considered to be a folk dance of the state of Maharashtra. It was earlier performed in Tamasha (a sort of folk drama). Lavani is still popular in Kolhapur and other parts of the state.