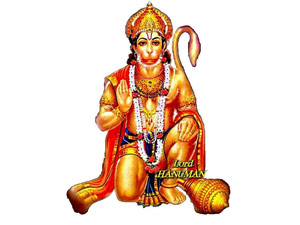 Hanuman Jayanti is one of the Indian festivals celebrating the birth of Hanuman deity. It falls on the 15th day of the Chaitra month (in the month of April) according to the Hindu lunar calendar. The day would be usually a full moon day. But, in some parts of India (Tamil Nadu) the birth of Hanuman (Aanjaneya) would be celebrated on an Amvasya day (no moon day) of the Margashirsh month (falls between December and January).  It is also celebrated during the month of Vaishakh (end of April and the beginning of May) in some other parts. The variation depends upon which calendar one would be referring to.
Hanuman (also known as Aanjaneya) was a staunch devotee of Lord Rama as the legends state. He was the son of Vayu (air deity) and helped Rama to rescue Seetha from Ravana’s clutches. Hanuman is revered for various reasons. For some he is the symbol of strength. For some he is the protector from evil spirits. Especially people who are affected by Shani (deity of mal-effects) would go to Hanuman temples on Saturdays to get rid of their problem. According to legends Hanuman is the only deity whom Shani would not dare to affect. So, Hanuman is revered for protection over distressing negative energies.
On the day of his birth the devotees would visit Hanuman temples, would hold spiritual discourses and would do puja at home by chanting mantras. Hanuman Chalesa is the special mantra that would be recited to appease Aanjaneya. Devotees would apply ‘sindhoor’ (vermillion) on their foreheads and the rituals would be done at dawn since Hanuman was born at dawn.