Posted by : Sandeep December 14, 2012
Thanjavur is a city in the state of Tamil Nadu, India. It is the headquarter of the district of same name Thanjavur district.  It is also known as Tanjore. The city flourished as learning and culture center especially in Cholla dynasty who rule there from 11th to 14th century. Thanjavur is known for its antiques, handicrafts, cotton saris, handloom silk saris etc. Tanjore Painting is also famous here. Thanjavur falls in fertile Cauvery delta region.  Cultivation of rice crop is done there on large scale. It is even sometimes called as the Rice Bowl of South India.
Places to see : 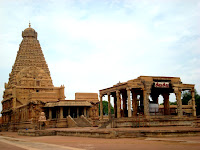 Brahadeshwara temple :
Brahadeshwara temple of is an ancient temple in the region.  It is world heritage site recognized by UNESCO. It was built by Chola king. The temple is built in excellent architecture and has 216 feet high tower over the shrine. It is visited by many devotees. The Chandra Bagawan temple, The Lord Murugan temple, the Sani Bhagawan Temple and Thirumananjeri are other some temples to be seen in and around the Thanjavur.

Vijayanagara Fort and Siva Ganga Garden are some of them to be seen near Thanjavur.

How to reach :
You can get here by state run bus or other private vehicles like car and luxury bus from Tiruchy, Madurai, Chennai, Bangalore and other cities and towns of Tamil Nadu and nearby state of Karnataka. Tiruchy is just 68 km away from Thanjavur and serves it as nearest railhead. The railway station of Tiruchy is well connected to other many cities and towns of the country. Tiruchy also serves as closest airbase to Thanjavur and is well linked by many flights to other major cities of the country.