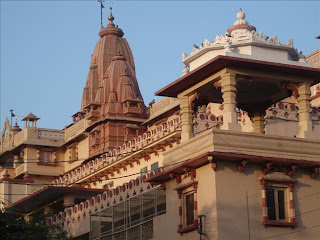 Mathura is a city in Indian state of Uttar Pradesh. It is the headquarter of the district of the same name Mathura District. It is the birth place of one of the most revered gods of Hindu, Lord Krishna.  It is an ancient city and has some references in great Indian epics of Mahabharata and Ramayana. Since the city has been invaded many times by Muslims kings, monuments and buildings in it have the blend of both Hindu and Muslim architecture.

Places to see:  Mathura houses many important temples and other interesting places in and around it.

Geeta Mandir :
Geeta Mandir is another prominent religious place around Mathura. This is the place where entire text of holy Geeta (holy book of Hindu) is inscribed on its precincts. It is built by the Birla Group
Dwarakadhish Temple :
Dwarakadhish Temple is yet another place of worship in Mathura. It is a temple of Sri Krishna and was built by Seth Gogul Das Parikh in 1814. The temple is beautifully structured and has many images of Sri Krishna’s beloved Radha along with his own idols.

There are about 25 Ghats around Mathura and each of them is related to Sri Krishna. Devotees are seen taking dip in the water there as it is widely believed that by doing so one gets rid of his sins.

Raja Bharatpur Palace :
Raja Bharatpur Palace is a prominent place of attraction in Mathura. It is beautifully structured and is perfect blend of Mughal and Rajput architectural style. Central part of the Palace is now converted in Museum and it displays many royal artifacts and other ancient articles.
Vishram Ghat, Keshevdeo Temple and Jama Masjid are some of the many other religious places in Mathura.

How to get there: Rail and road connects the city of Mathura to other parts of the Uttar Pradesh and the country. Mathura railway station is junction station and therefore it is well linked to Delhi, Mumbai, Chennai and other many cities and towns of the state and the country. Many state run buses and other private vehicles connects it to Allahabad, Agra, Faizabad and other towns and cities of the state. Indira Gandhi International Airport at Delhi is nearest airport to Mathura. It is just 148 km away and well connected by several flights to major cities of India and other countries.