Earlier known as Pratishthana, Paithan is a Tahsil town in the state of Maharashtra, India.  It is situated on the bank of Godavari river and is 56 km away from city of Aurangabad district of the state. Paithan was the capital of Satvahan dynasty in ancient times.
Paithan is also known as 'Land of Saints'  as it is home of many saints and gurus. It is also the birthplace of Sri Nimbark, the founder of the Nimbarka Sampradaya tradition of Vaishnavism.

The temple of Sant Eknath Maharaj:-
It is prominent place of worship in Paithan. Paithan is the place where great Saint Eknath was born. Samadhi of the saint can be seen there. The shrine of Saint Eknath is visited by thousands of devotees on the occasion of Nath-Shasti festival, which is held annually. 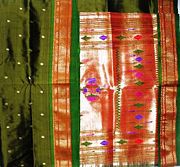 Paithani Kendra:-
The art of making Paithani is more than 2000 years old and has its roots in Paithan. The town is also famous for its silk saris known as Paithani Sari and Paithani Shalu. These saris are world famous for beautifully embroideries with silver and gold borders. You can also order custom-made beautiful Paithani Sari.

Nathsagar dam:-
It is another interesting place to be seen there. It is one of the largest dams in India. The dam is on the river of Godavari. The river is biggest river in southern India. Jayakwadi bird sanctuary is home to wide varieties of bird species. The sanctuary draws more many birds including migratory ones. About 200 bird species can be found there.  More than 70 species of birds are migratory. Flamingos, Cranes, Shoveller, Pintails, Wigeon, Pochards, Teals, Brahmany Duck, God Wit, Glossy Ibis and  Shauces are some of migratory bird found there.

Dnyaneshwar Watika :-
It is another place of attraction in Paithan. It is beautiful garden made on the line of  Vrindavan in Mysore. The garden has musical fountains which fascinates the visitors. A museum is situated near the garden  and it house many artifacts found in excavation. If you are on the visit of this town take some time out to visit the museum.

How to reach:
By road : Paithan is well linked by state highway to other parts of the state. You can reach Paithan via Aurangabad. It is the best to get to the town. If you are coming from Pune you can  take the road to Paithan  via Shevgaon after Ahmednagar city. Many state run buses and other private vehicles are available from Aurangabad, Pune, Ahmednagar and many other cities and towns of the state.
By Railway : Aurangabad railway station is the nearest railhead to Paithan and is well connected to Mumbai, Nasik Pune, Nagpur and many other cities and towns of India. Chikalthana Airport at Aurangabad serves the closest airbase to Paithan. The airport is well linked by regular flights to Mumbai, Nagpur, Bangalore and other metro cities. You can book a cab or taxi online from Chikalthana airport to Paithan at affordable fare.