Posted by : Sandeep October 1, 2012
Located in the Indian state of Karnataka, Bijapur is rich in historic monuments of architectural importance. These monuments are especially built under the rule of Adil Shahi Dynasty. The city was founded in 11-12th century by Kalyani Chalukyas. It was then known by the name Vijaypura, City of Victory as it literally means. The city of Bijapur is mainly consists of three parts namely the Citadel, the Fort and the remains of the city. Built by Yusuf Adil Shaha, the citadel is of great strength and spreads a mile in circuit. Built in 1566, the Fort is surrounded by a massive wall of 6 m in circumference. Height of the wall is between 30 to 50 feet and further strengthened by ninety six massive bastions of various designs. Outside the wall are the remains of the vast city with most of its part in ruins. Innumerable tombs, mosques, caravanserais and other edifices give strong evidence of splendid history of Bijapur.
Places to visit:
Rich in historical monuments, Bijapur offers its tourists many places of interest. Most of the historical places are related with Islamic architecture. The most famous monument in Bijapur is Gol Ghumbaz. 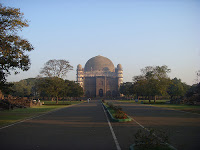 Gol Ghumbaz :-
It is the tomb of Mohammed Adil Shaha who ruled the region during 1627-1657. It is the largest Dome built in India and second largest in the world after Dome of St. peter Basilica in Rome. Special attraction of this monument is the central chamber where every sound is echoed seven times. Whispering Gallery is another attraction of Gol Ghumbaz where even minute sound can be heard clearly 37 m away. Ibrahim Rauza is the tomb of Ibrahim Adil Shaha the second. It is built on single rock and noted for its symmetry of features. It is said that design of Ibrahim Rauza served as one of the inspirations for that of famous Taj Mahal.

Malik-e-Maidan :-
Malik-e-Maidan is the largest medieval cannon in the world with its size of 4 m long, 1.5 m in diameter and this gun was brought from Ahmadnagar as a trophy of war won there. Built by Ali Adil Shaha, the Chand Bawdi is situated near the eastern border of Bijapur. It had the storage capacity of 20 million liter water.  Later on it became a model of many other tanks constructed in the city. Built by Mohammed Adil Shaha in 1646. 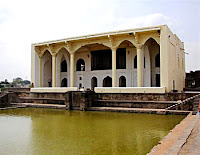 Asar Mahal :-
Asar Mahal was used to serve as Hall of Justice. It was also used to house hairs of Prophet Mohammed’s beard. Situated at Shivapur on Sindagi road, 85 feet tall statue of Shiva is the second largest statue of Lord Shiva in India. Upli Buruj, Gagan Mahal, Barakaman, Saat Kabar, Torvi Narasimha temple are other historical monuments  and places  in Bijapur.


How to reach:
Rail and road connects the city of Bijapur to many other parts of the state and the country. Trains connect the city directly to Solapur, Bagalcoat Gadag, Dharwad, Bellary, Yeshwantpur, Hubli, Mumbai and Ahmadabad.  The main bus station is located southwest of citadel, near the city center. Many state run buses and private luxury buses connect it to Belgaum, Gulbarga, Bidara, Hubli, Solapur and many other cities and town of the state and the country. The nearest airport to Bijapur is Belgaum airport which is 205 km away from Bijapur. Belgaum is connected to Mumbai and other major cities of India.

Other details:
Bijapur Music Festival is organized by the Karnataka Government every year.  Talented artists and musicians take part in the Festival. The festival draws a large number of people from other parts of the state also.