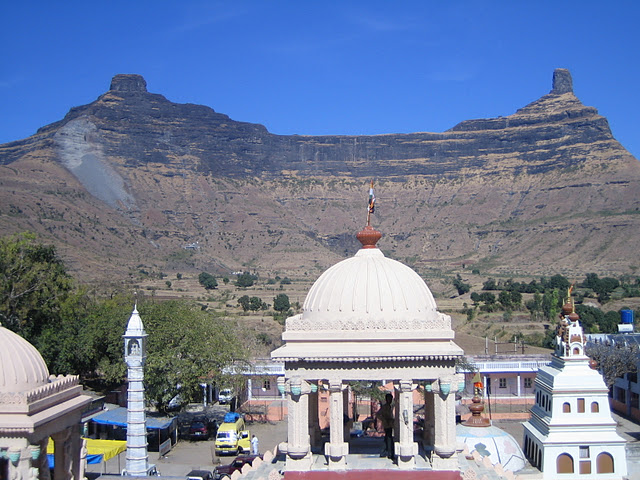 Mangi Tungi is a famous pilgrimage center of Jain religion. It is located in Baglan tehsil of Nasik district of the state of Maharashtra.  Mangi Tungi is a twin-pinnacled peak and is one of most sacred places in Jain religion. It also holds significance from Hindu point of view as according to mythology. Mangi Tungi is considered to be the place where crore of ascetic saints including Ram, Hanuman, Sugriv, Neel Nal, Mahaneel etc gained the salvation. Thus the place is also referred as 'Siddha Shetra'.

Manmand, Shirdi, Nashik, Pune are convenient places to reach Mangi Tunngi. It will best option is to book a cab online to reach  Mangi Tunngi.
About 4500 steps take you to Mangi Tungi peak which is abundant with many religious and historical temples and monuments. Many caves named after the Jain Tirthankaras like Mahavir, Shantinath, Adinath, Parshava etc are situated there.  Many idols and sculptures of Tirthankaras are found in those caves. Besides there are some inscriptions carved on the idols and walls of the caves which date many centuries back.

There are about six caves at Mangi peak and 2 caves on Tungi hill. The first cave contains a 3.5 feet high idol of Bhagavan Mahavir. Besides, there are numerous stone idols and sculptures carved on the walls of the cave. One of the caves houses the idol of Adinath. Many other idols and sculpture carved in the caves are in Padmasan and Khadgasan posture. Tungi peak also houses some caves containing the idol of Hindu gods and Jain Tirthankaras as well. Besides Bhilwadi village situated at the foot of Mangi Tungi peak is home to several Jain temples built about 200 year ago. Parshwanath Jain Temple and Adinath temple some of the Jain temples situated in the village.

Mangi Tungi hills are also famous for trekking. Stay facility is available at Mangi Tungi which can be booked online on their official portal. There are around 900 Rooms and two big halls for pilgrims with facilities of Mess, Beds & Utensils.

How to reach Mangi Tungi

By Air: Nashik airport is the nearest airport to reach Mangi Tungi if you are planning to reach here by flight. From the airport you can hire a private cab or taxi for Mangi Tungi.

By Road:
Mungi Tungi can easily be reached from the Nasik city in Maharashtra. Well chauffeur driven cabs and taxis can be hired from Nasik to reach here.