Posted by : Sandeep May 25, 2012
Allahabad, one of the holiest spots for Hindu, is a city in the Indian state of Uttar Pradesh. It happens to be India’s second most ancient city and lies at the confluence point of India’s three holy rivers- Ganga, Yamuna and Sarasvati. Allahabad serves to be one of the holy places of Kumbha Mela, the biggest religious congregation of Hindu.  Along with its religious significance places, Allahabad is home to several places of tourist attraction.

It is a key attraction of Allahabad city. The Allahabad Fort of Uttar Pradesh was built by Mughal emperor Akbar in the year 1583 near the banks of the river Yamuna. The fort has three beautiful galleries surrounded by high towers. At present the fort is used by Indian military and therefore some parts of the fort is not opened to the tourists.

It is the confluence of three rivers namely River Ganga, River Yamuna and mythological and invisible River Sarasvati. The place offers the fascinating views of sunset and sunrise. Famous Kumbha Mela, which attracts hundreds of thousands devotees from different parts of the country, is held on the bank of this holy Triveni Sangam in Allahabad. The merging of Ganga River in to Yamuna offers a spectacular view to the visitors.

Khusro Bagh is Close to the Allahabad Railway Station, Allahabad, Uttar Pradesh.It is a historic garden built by a Mughal king in memory of his beloved son Khusro. Khusro was killed by his own brother Shaha Jahan. The mausoleum of Khusro is located in the garden. Next to this sandstone-built tomb lies the tomb of Khusro’s mother who had killed herself after his son’s murder. Khusro Bagh is dotted with large number of mango and guava trees. 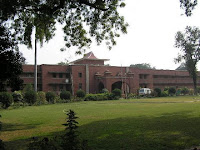 Jawaharlal Nehru inaugurated this museum in 1947. It has 18 galleries devoted to archaeological findings, stone sculptures,natural history exhibits, art gallery. The museum also displays the documents and the personal effects of Jawaharlal Nehru and the Indian freedom movement.
The museum has excellent collection of sculptures and terracotta artifacts

Apart from these places of interest, the city of Allahabad houses many other places worth a visit. Allahabad Planetarium, Ashoka Pillar, Anand Bhavan and Swaraj Bhavan are other places of attraction to be visited in Allahabad.