Posted by : Sandeep April 23, 2012
Raipur, the capital city of Chhattisgarh state, is known for its rich culture and tradition. It is dotted with several places of interest which reflects its distinct culture. Many worth visiting places make Raipur a major tourist destination attracting a number of tourists from different parts of the country.

Doodhdhari Monastery:  It is another major attraction of Raipur. The monastery is named after Swami Balbhadra Das who used to take only milk as his food. One can also visit an old temple situated near the monastery. Dedicated to Lord Rama, the temple was built by King Jaitsingh during the 17th century. The temple is known for its fascinating murals. The temple along with the monastery is situated near the bank of an ancient river called Maharajabandh. 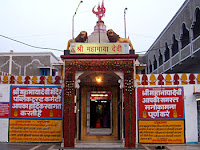 Mahamaya Temple: It is a prominent place of worship in Raipur. The temple is situated in old fort area of the city on the bank of river Khaaroon. Dedicated to goddess Mahamaya, the temple is must visit place for Hindus in Raipur. Mahishasura Mardini, Durga, Jagdambe are other names of the deity.
There are many other places of interest tourists hardly miss to visit on their tour to Raipur city. Budhapara Lake, Shaheed Smarak Complex, Mahakoshal Art Gallery and Vivekananda Ashram are some of them.