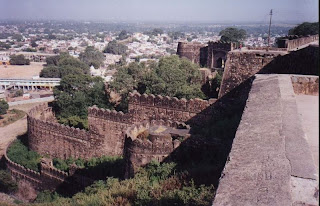 Jhansi is a small town in the province of Uttar Pradesh.Chhatrasal was the Bundela King and ruler of Jhansi in the year 1732. Then the Mughal emperor always disturbed Jhansi, so the help of Marathas was taken on the promise of 1/3 rd. of kingdom of Jhansi upon the death of the king. Upon the death of Chhatrasal the Marathas developed Jhansi and its adjoining places. Later on Maratha rulers Peshwa surrendered his rights over Jhansi to British East India Company. When Maharaja of Jhansi died without an heir his Queen Laxhmibai was not allowed to adopt a child as it was customary in those times. And later Jhansi was annexed by the British Governor General of India. Rani Lakshmibai opposed this annexure; she fought bravely and died fighting in Gwalior. Jhansi came under British rule only in 1858 and became part of united province and was taken in Uttar Pradesh after India’s independence in the year 1947.