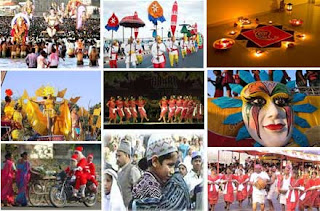 Culture of Goa
Goa is known for a unique culture which is quite different from other parts of India. Goa which is home to the people of different religions has very easy going and relaxed culture. Goans (the people of Goa) are still following their rich culture and tradition and at the same time we find them to be much ahead of the time and the trend of world. Goa is such a place in India where you will find the people of different religions not having any issue or arguing and fighting the over the religious issues. Everyone here is free to follow any life styles, wear any type of clothes , follow any religion, tradition and eat whatever they like, be it vegetarian or non-vegetarian food. This kind of life style is not seen in other part of India where tradition and religion are inseparable from the lives of the people.

Goans are very passionate about the music. In fact the music is integral part of lives of the people of Goa. Goans had wide variety of choice of music. From Indian music to western one they are indeed die-hard fans of Music. For the last some years they have taken a much liking to the western music and have wide variety of choice of western music. Music is such deeply rooted in Goa’s culture that most of the people can play a couple of musical instruments. Goa has seen the Portuguese rule for long time and therefore it is little surprise that most of the songs they sing and music they play have the touch of Portugal tune and style.

Portuguese rule in Goa has seen many people converting to Christianity and hence you will find many people of Goa following the Christian religion. But at the same time they have not forgotten their tradition completely. The people of Goa are seen celebrating festival of all religion with equal zest. Along with many churches built largely during the Portuguese rule there are many temples in situated in Goa. Sea food in Goa is a famous in the world. Rather it has become a synonymous with Goa and has got it worldwide appreciation. Goa is one of those few places in the world which offers wide range of sea foods. Wide varieties of fishes, prawns, mussels, crabs and oysters are used for the numerous dishes of sea food.

Night life in Goa is very vibrant and Goa is much ahead from metros of India in this respect. It is said that Goa never sleeps. It is after the sun set that the beaches of Goa come alive. Music, dance, lights etc make Goa one of most sought after destination in India.